Apparently “The Hardest Cycle Race on Earth is not in France!” (according to Outside Magazine). 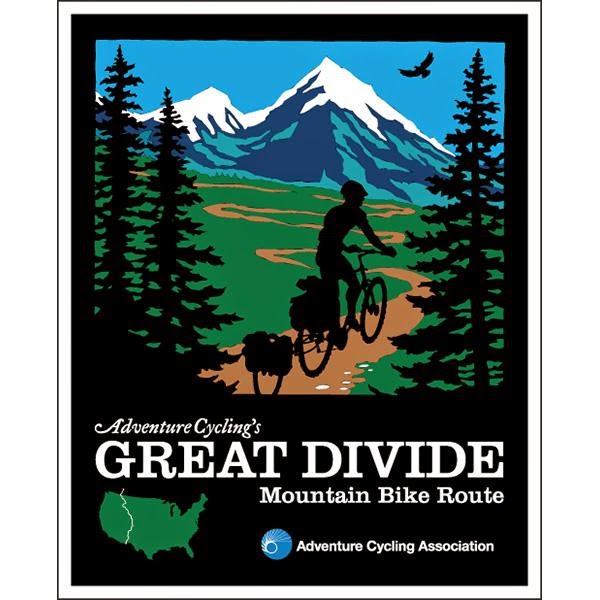 There are plenty of cycle races around the globe that bill themselves as the hardest, Le Tour de France (TdF) and Ironbike both have a good shout. But when you stack up the figures nothing quite compares to The Tour Divide.
First up, Le Tour is a Pro race, fully supported, with all the pampered luxuries that the teams can muster. It’s also on European roads, riding 6.8kg carbon super-bikes.
Ironbike (MTB) is tougher. Racers camp together every night before tackling ferocious climbs and terrifyingly exposed descents, one after the next.
Tour Divide is longer than TdF at 2745 miles. It has more climbing than Ironbike – 200,000 ft/61,000m. That’s not a typo! And it is entirely self-supported. Racers cannot accept any outside assistance and have to be completely self-sufficient for the entire duration, including carrying all of their necessary kit, from food, clothing, maps, and spares, to camping gear. They also have to navigate The Great Divide Mountain Bike Route (GDMBR – The longest off-pavement route in the world) all the way from Banff in Canada to Antelope Wells, New Mexico, on The US/Mexican border. Most of it on remote trails frequented by Bears and Mountain Lions, amongst other hazards like snow, altitude, and deserts. Oh, and the clock starts ticking non-stop from the second you start.
The American “Adventure Cycling Association” recommends taking 64 days to tour the route. The fastest Tour Divide racers do it in less than sixteen.
It’s a bold claim from Outside Magazine but all claims are subjective, it just depends who you ask. “Shaggy” John Ross (speaking to Privateer Magazine) thinks The Colorado Trail Race is the hardest. I have several friends who are firmly in the Ironbike camp. Tour Divide is almost certainly the longest though.

Fundamentally it’s an Individual-Time-Trial not a race. It’s not actually official either, there is no entry fee, no prize money. Just a set of guidelines and the spirit of The Gentleman’s Agreement. Each rider has to carry a spot-tracker which can be monitored live on Trackleaders, and which has, during the race, a worldwide audience of “blue dot” watchers tuning in to follow the race progress. I like the sound, and spirit, of this race.
I intend to be in Banff on the second Friday in June 2016 for The Grand Depart.

I made this momentous decision whilst recovering from broken ribs and a broken elbow a few months ago. I had a lot of time on my hands and I spent it researching the race.
Since then I have been planning and researching a lot more.

I bought Bikepacking Luggage from Alpkit. I started to develop a light & fast bivvy, for sleeping on the route, using an Alpkit Hunka Bivvy as the basis for it. Alpkit very kindly gave me some discount too, which I am very grateful for.

And I bought a bike. I didn’t actually mean to buy a bike!

I had been considering a few options for different hardtail frames so that I could build a suitable bike over the next year or so. Initially I thought about 650b/27.5″ but the gains from using a 29er are too much to ignore (and the benefits of  650b over my current 26″ bikes are negligible at best, if any). I had pretty much settled on either a Pivot LES 29 or a Whyte 29-C, both are carbon and both cost a similar amount. I had been waiting to pick up a 2014 model in the sales but neither of them were dropping in price by very much and I couldn’t afford them.
I did have a preference for the Pivot because of sightly smaller frame sizing and the fact that it has a bolt-thru rear axle. I just happened to spot on their Twitter feed (Pivot UK) that they had a few ex-demo bikes for sale; so I took a look, not really expecting anything. Lo and behold they had a small Pivot LES 29er with a full XTR build! After a few emails and a bit of negotiation I managed to secure it, and at a price that I could just about afford 🙂 (I may have to sell most of my other belongings on eBay though!)
So from now on I’ll be using the 29er for racing and continuing to use 26″ bikes for proper riding (that should upset the 29er die-hard’s out there! :D).


At some point in the not-too-distant future I am going to have to start doing a lot of training.
That’s the downside to having an adventurous spirit!
When I get to Canada I want to be in shape to be competitive. Don’t get me wrong I have no aspirations of attempting to win, far from it. But I would like to put down a respectable time and for me that means aiming at around 21-25 days. Sub-25 is considered competitive on current standards.
There are, however, a lot of factors to consider when setting oneself such a lofty target time.
The first one is to stay injury free for the next 16 months or so. Secondly the weather plays such a dominant role in the race that it is impossible to go in with a clear plan. Heavy snow on the high passes or heavy rain in other areas can add days to a racers planned finishing time. So although it’s nice to have a measurable target it has to be tempered with realism. Also I have to actually get to Antelope Wells in the first place; the attrition rates are fairly high, with mechanical, physical, and psychological, issues putting a lot of people out of the race at any point along the course. I am under no illusion about this.

I might also be able to race a few friends; it’s always nice to race your mates!
My very old friend and riding buddy Mitchell Bryan wants to come (he’s very competitive! Mitch is thinking 18 days!), my friend (and Yak Attack Race Director) Phil Evans has expressed an interest in tagging along, and former Yak Attack racer Craig McGhee is also planning to be there.
That should it make it a lot of fun! I’m hoping that they all get punctures along the way and I get to the finish first without having to race too hard.


And if I make it all the way to Antelope Wells, New Mexico?
Well I have a few options. I might be so knackered that I have to fly back to Banff.
I might also consider cycle touring up the West Coast through California, and enjoying some surf!
I might have a few days rest, turn around, and head for Colorado to hang out with friends, drink coffee, and ride singletrack.
I might even turn around and race all the way back to Banff again! (or not!)

I won’t know the answer to that question until I get there.

You might have gathered that it’s become my latest obsession. I’ve watched the documentary of the 2009 race “Ride The Divide” several times, and I’ve bought and read 10 books!

The Cordillera Volumes 1-6.
This is published each year after the race (since 2009) and is a compilation of pieces written by individual riders; the proceeds of which are donated to a fund to support the education of the Linnaea Blumenthal daughter of racer Dave Blumenthal who sadly died in an accident during the 2010 race.
The Cordillera is available from LULU. Please purchase from there rather than Amazon etc because all of the profits go directly in Linnaea’s education fund.

Two Wheels on my Wagon (also published in the US as Eat, Sleep, Ride.)
Paul Howard

Be Brave, Be Strong.
Jill Homer

Trail Magic and the Art of Soft Pedalling.
Scott Thigpen

Dividing the Great (from the not so great).
John Metcalfe (this is about touring The GDMBR not racing the Tour Divide).

All are available on Amazon.

My favourite ones are Two Wheels on my Wagon and Dividing the Great, both are excellent. Coincidentally (or not?) both are written by British authors, perhaps it’s the great British sense of humour but I found them really funny, and very well written, I couldn’t put them down. Even if you’re not interested in the race itself these two books will make for great reading as amusing travelogues if nothing else.

There is a strong on-line community dedicated to the race:

Bikepacking.net has a lively forum which is full of chat and info during the race here

And for the Spot Tracking each rider has a “blue dot” on Trackleaders.com here

It’s actually quite an addictive pastime following the race each year, even for a lot of non-cyclists!

I’ll be writing about my training adventures, kit development, and all of my mistakes along the way, right up until the race start (for me) in 2016.
I hope you enjoy the ride with me 🙂