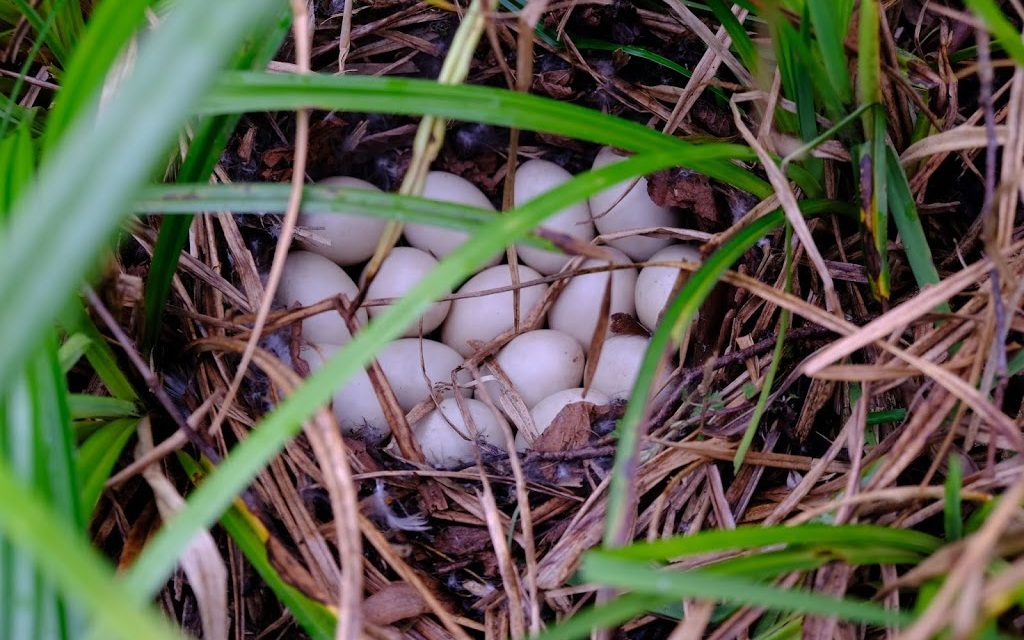 Is spring finally sproinging? Whilst it hasn’t exactly been a long hard winter here in the UK it is still nice to pass the equinox and feel, on occasions, the increasing warmth of the spring sunshine.

I’ve had a fairly quiet time of it of late but I intend to put that right in the very near future.
Aside from a three week trip to Nepal for the Pokhara IV Mountainbike Race (which was mostly a much needed holiday riding my bike on dry trails), I have been working and saving hard in preparation for having a year off – I’ll come to that later.

I currently have a number of work-in-progress blog posts on the back burner (as always) which I’d like to get finished and uploaded – the story of our epic singlespeed cycling journey down the length of Sri Lanka being one of them, along with my aforementioned trip to Nepal. I often find it difficult to complete the stories about my longer trips, sometimes it’s hard to figure out what to include and what to leave out; and I find also that I need to be in the right frame of mind to put them over as creatively as I’d like to – call it writer’s block if you will – but I need a quiet and contemplative mind to be at my best; when I return home I am usually straight back into the cut & thrust of work, and life, in general, and struggle to find those creative moments that I need (to enjoy doing it, and thereby write something that is palatable to the reader). I know what I mean, even if you’re confused. 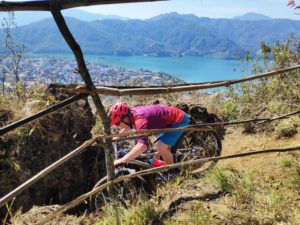 I am now in my third spring of owning the wood (where did all that time go?) and I am back to enjoying it as much as I did in the first few months. As regular readers may be aware I had a few problems with unwanted interlopers causing a lot of problems during the first eighteen months or so – not least the burning down of my wood store and compost toilet – and undoing much of the hard work I was putting in. I did genuinely consider selling at one point, something that should have been a constant source of joy was proving to be to an overwhelmingly stressful experience, but I reasoned that things would eventually calm down and stuck with it. Things have calmed down, and besides there’s nothing in there now that can be set on fire; perhaps one day I will be able to build another loo. Instead I have been slowly putting in sections of boundary fencing in order to demarcate the wood as being private property; scrounging and recycling used timber as usual. Extensive fencing wasn’t really in my plans, I had no desire to keep people out of the wood, unfortunately the bad apples have spoilt it for the good ones; the health, protection, and biodiversity of the wood is my number one priority. Going in to the future I plan to have ‘open days’ at certain times of the year so that local people can come and enjoy it, and I still have plans to work with local schools for field trips and nature projects. Friends, though, are always welcome. 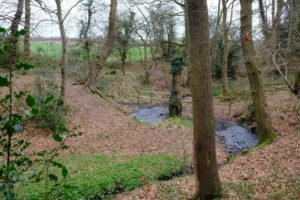 The hard work is certainly paying off; I am definitely seeing signs of improvement. The muddy footpaths that were prevalent when I bought the wood have all but returned to nature and wildflowers are growing in their place.

Talking of wildflowers, I am still very much in the learning curve of identification; I have some truly wonderful flora abounding – swathes of Wood Anemone, Lesser Celandine, Wild Garlic, and English Bluebells begin to carpet the ground at this time of year followed by a kaleidoscope of others throughout the seasons – some of my favourites are Yellow Archangel. Red Campion, and the delightfully named Opposite Leaved Golden Saxifrage. 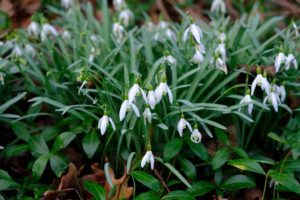 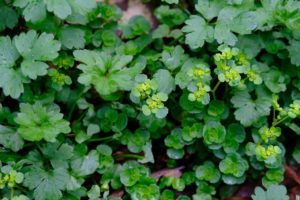 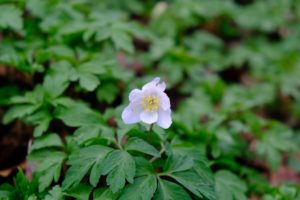 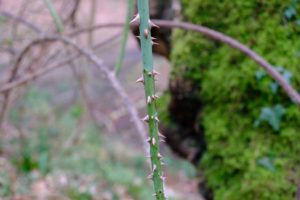 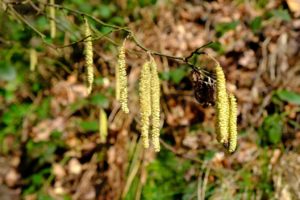 This year I found, for the first time, a small colony of Snowdrops flourishing in a quiet corner. I have also recently discovered what I think may be a mature Guelder Rose or Dog Rose, I’ll identify for certain later in the year.

I have scattered some Yellow Flag Iris seeds around one particularly marshy area (kindly supplied by Mark & Claire, my Brother and Sister-in-Law) to provide cover and habitat, and to add another splash of colour. I’m looking forward to seeing how they develop in the coming years.
In a few weeks time I will begin my now annual onslaught to eradicate the invasive Himalayan Balsam that proliferates in many spots – this being the third spring I anticipate seeing some tangible results for my efforts and hopefully will have it eliminated completely in another couple of years.
If you’re thinking that I might be a bit obsessed with flowers then don’t get me started on fungi; I might actually be obsessed with fungi.
Bird life is also on the increase and I recently stumbled upon a Mallard nesting in a clump of Pendulous Sedge, sitting on fourteen eggs no less. I am also still very much in the learning curve of identifying birdsong (my birding friend John Lynch recently put me onto an excellent resource for that here).
Woodpecker, Wagtails, Wrens, and Mistle Thrush are often heard if not often seen. The local Buzzard population on the other hand are always in view and their distinctive mewing is a delight to hear. 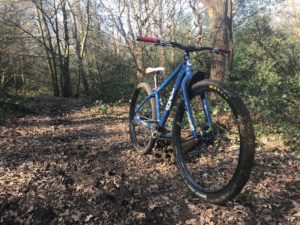 I have recently been working in London on a refurbishment project and have taken the occasional window of opportunity to get out and explore some of its green spaces on my bicycle. A thorough circumnavigation of Wimbledon Common was disappointingly lacking in any Womble sightings. I did however discover that there is a fully restored windmill there, and I found some excellent singletrack. Who would have thought it possible to find singletrack in the heart of the capital?

The expansive Richmond Park was also charming, and surprisingly natural. I sauntered past a very nonchalant herd of deer who seemed far less interested in me than I was in them.
(Considering it was created as a deer park in the seventeenth century by Charles I it shouldn’t really be a surprise).
In such a densely populated area it is a surprisingly beautiful place to visit, and it’s status as a Nature Reserve, Site of Special Scientific Interest,  and Special Area of Conservation, cement that fact. 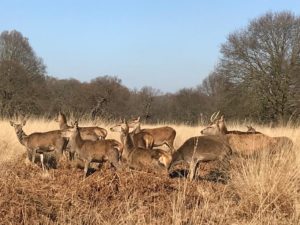 As a Royal Park it is also quite posh. I called in at the cafe at Roehampton Gate for a cup of tea and whilst idly perusing the menu I noted that they served such delights as Sourdough toast, Quinoa salad, and Spinach smoothies, along with some things on the menu that I didn’t even know were food; the corresponding prices, as you might imagine, matched the lofty intentions of the fare. I elected to eat somewhere else.
In fact it is so posh that they even had a Park Tool work station for passing cyclists with any minor mechanical issues. (For those of you that don’t know what I’m talking about Park Tool are very expensive). 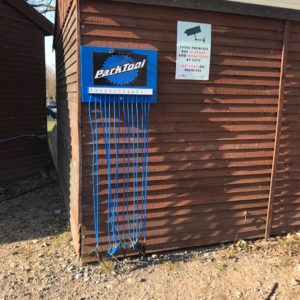 At the end of April I am beginning a sabbatical from gainful employment (in other words: I’m having a big long holiday; almost certainly a year, and possibly more if I can make my money last). I have spent the best part of three years saving judiciously and now intend to continue scrimping and scraping to make said savings last as long as possible.
My first little adventure is in Scotland, where intend to tour the North Coast 500 on my bicycle over ten days or so. I then intend, if I find it suitably captivating, to have a go at whizzing round very quickly – 40 to 48 hours will be my goal – solo and unsupported. The current record of less than 30 won’t be in any danger, but that was set in a fully supported effort.

I then intend to have a few weeks at home tackling the Himalayan Balsam and doing a few jobs around the wood.

After that my plans are fairly loose. Sometimes one can have too much choice, and I am having difficulty deciding where to go next.
A bicycle tour across Europe is one such possibility, as is a Vanlife tour of Alpine resorts taking advantage of the ski lift systems and just riding my bike down hill.
I’ll probably spend a few days doing just that at bike parks across the UK first to get into the swing of things.
The autumn and winter will be spent in Asia. I like sunshine and wearing flip flops, and have no great appetite for a UK winter when I can spend my time productively dossing around in warmer climes.
I might then finish my trip with a month or two in New Zealand just for good measure (and the very good trail systems around Rotorua and Queenstown).

There are a few other  things I’d quite like to try too.
For years I’ve been meaning to learn to surf, I would also like to learn to kickflip a skateboard (my mum wouldn’t let me have one when I was a kid – she said that I, not it, was too dangerous); and I’d like to spend some time practising wheelies, I can pull a wheelie but not as well as I’d like too. 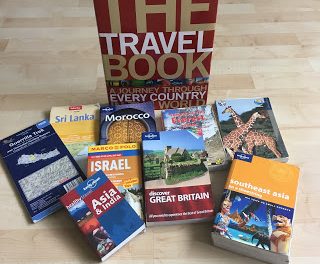 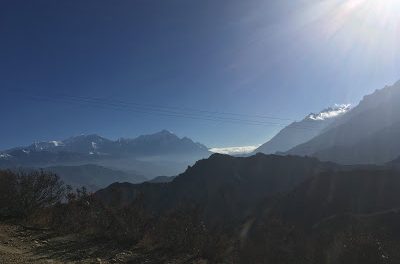 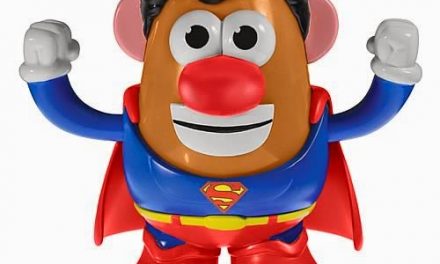